Everyone knows how big the Indian Railway network. The massive number of people and freight that it carries along a complex and one of the longest railway networks in the world is simply astonishing. But did you know that there are some trains that even cross the Indian borders? It is true, there are some trains that travel to neighboring countries like Pakistan, Bangladesh, and Nepal. It is needless to say that the security in such trains is very tight and rigorous checks take place during its journey when it crosses the Indian borders.

Train Connectivity Between India and Bangladesh

Bangladesh was formed in the year 1971 and India played a vital role in its formation. Therefore, the bilateral relations between the two countries were very good and kept on improving. But the transport links between the two countries were weak and to make them strong an agreement was passed in 1980. The transport link started with the opening of a bus service from Kolkata (capital of West Bengal) To Dhaka (capital of Bangladesh).

Formerly known as the East Bengal Express, the Maitree Express was started on 14th April 2008. It starts its journey from Kolkata and travels around 393 Kms to reach Dhaka. It takes around 10 to 11 hours to complete its journey. Two security (immigration) checks take place in Kolkata (Gede) cantonment and Dhaka (Dorshona) cantonment.

There is a predefined number of seats for which you can get a return ticket. You can book these tickets up to two days before the actual date of journey. You need to validate these tickets on the station 2 hours before the departure of the train. The tickets only contain the base fare. All the other charges and taxes have to be paid at the station when you validate your ticket. This is applicable for both Dhaka and Kolkata return journeys.

The Bandhan Express is a fully air-conditioned train that runs on every Thursday. It travels a total distance of 172 Kms from Kolkata to Khulna and takes around 4 hours and 30 minutes to complete its journey. It has two intermediate stations namely Petrapole (on the Indian borders), where it stops for 10 minutes, and Benapole (on Bangladeshi border), where it stops for 15 minutes. The eastern railway zone of the Indian Railways operates this train. You have to get the Visa from the Indian Embassy before the journey but the immigration process is done at Kolkata. There are a lot of freight trains which run on this route.

The foundation stone for a new project has been laid by the Indian and Bangladeshi governments o 31st July 2016. A new railway link will be built under this project that will connect the city of Agartala (capital of Tripura) to the city of Akhaura which is the southeastern city of Bangladesh.

You may also like this : An Evolution To Railway Travel – High-Speed Rail of Indian Railways

Train Connectivity Between India and Nepal

Back in the year 1927, the Britishers built the first railway line that connected Raxaul in India to Amlekhagunj in Nepal. This was a 2 feet 6-inch narrow gauge railway and it was 39 Kms long. Therefore, it was easy for people from various regions to reach Amlekhganj easily. But this railway line was later closed.

In the year 1937, the Britishers built another railway track, that was 32 Km long, which connected Janakpur to Jaynagar which were both Indan cities. This track was built to carry timber from the once heavily forested areas of Janakpur. The Janakpur railway line is, therefore, historical. This line facilitated people from both sides of the border to cross the indian borders easily.

The railway line from Amlekhagunj to Raxaul was later converted to 5 feet 6-inches that helped the Indian Railways to connect Sirsiya (Birganj) Inland Container Depot (ICD). Even though some parts of this railway were started being used from 2002, the railway became fully functional in the year 2005. The railway helps to move freight from Kolkata port to other locations in the nation. When it comes to China imports, this railway is the most important entry point and vital for Nepal’s commercial hand. This railway travels 700 Km distance to connect Sirsiya (Birganj) to Kolkata port. The only train that runs between India and Nepal is:

This express doesn’t technically cross the indian borders but gets you pretty close to it. The Seemanchal express runs from Anand Vihar to Jogbani. The train takes around 24 hours and 50 minutes to complete this 1379 Km long journey. The Jogbani station is only 6 Km away from Biratnagar which is a city in Nepal. Therefore, once you get to Jogbani by railway, you have plenty of public and private transport options like bus, cabs, or auto that will take you to Biratnagar in Nepal.

You may also like this : 7 Magnificent Indian Railway Route You Must Travel

Train Connectivity Between India and Pakistan

India’s independence came at a cost of partition and formation of two countries namely India and Pakistan in the year 1947. The critical relationship between these two countries leads to the closing of major transport links between them. The Kashmir war, which happened later, worsened the condition even further. The international border between the nations was completely sealed off, therefore no civilian could cross it anymore.

The train that was operational between Jaipur (India) and Karachi (Pakistan) was destroyed by the Pakistani Air Force during the war of 1965. Later in 1977, Samjhauta Express was started that connected Attari (India) to Lahore (Pakistan) which was also targeted by terrorists. Indo-Pak relations have always been volatile, therefore no official trade relations exist between them. The only train that runs between India and Pakistan is:

The Samjhauta Express is the only train that connects India to Pakistan. It starts from Delhi, India and stops at Lahore, Pakistan. The train crosses the Indian borders at Attari and the Pakistani border at Wagah. The train first starts from Delhi and directly stops at Attari where the passengers are checked for immigration and customs. There is no other stop in between Delhi and Attari. The distance it travels up to now is 472 Kms and it takes 8 hours and 5 minutes to complete this journey. The train is officially known as the Delhi-Attari/Samjhauta Link Express.

The train then enters Pakistan from Wagah border and then it’s officially known as the actual Samjhauta Express. All the passengers are checked for immigration and customs again at Wagah. The train runs from Attari to Lahore and back. It takes no other stop in between. During its journey between these two stations, the Samjhauta Express travels a distance of 27 Kms and takes around 4 hours and 10 minutes to complete its journey. The train has 3-tier AC and sleeper coaches.

The Samjhauta Express was targeted by terrorists on 18th February 2004, where they placed bombs in two passenger-filled coaches and later fired on the train. There were 68 casualties and more were injured during the incident. Among these casualties, many civilians were from Pakistan and a few from India. Apart from that, 3 policemen were also killed in this attack. Security was then increased further to stop such attacks from happening again on the train. No more attacks have taken place since then.

Crossing international borders is so expensive that only a few of us are able to do that in our entire lifetime. But Indian Railways provides a much cheaper and exciting way for us to cross the indian borders safely and enter another nation. It is an experience that we should definitely go through at least once. If you decide to get on one of these trains then prepare your Visa’s and Passports immediately.

If you liked this article then do share it with your friends. If you have something to add or have any other suggestion then please leave a comment below. 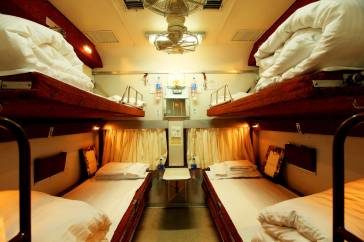